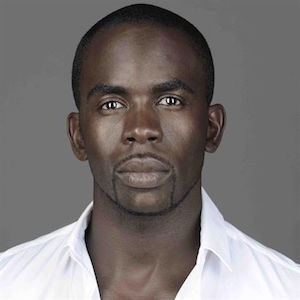 Today’s guest is the force of nature that is Jimmy Akingbola. Not only is he an incredible actor and a popular face  on our TV screens in Holby City and Rev amongst others, he is also a regular theatre actor with such productions as Henry VIII and Look Back in Anger and founder and joint MD of The TriForce Creative Network.

Phew. I tell you this bwoy can work hard!

Jimmy has just filmed a series of The Arrow for the US CW Network and is about to open at the Royal Court in “Father Comes Home From The Wars.” I am are so pleased to  have got 10 minutes to ask him a few questions.

1. How did you break into the industry?

I went to ALRA drama school for 3 years and then I got an agent (Adrian King Associates) and then after 2 months of auditioning and getting lots of no’s I booked a play at Birmingham Rep Theatre called Nativity and then my career started from there.

2. What were your challenges?

My first challenge was finding a job that would pay me enough money to pay my rent, but that would have the flexibility to allow me to audition for acting jobs. Once I had cracked I had to learn how to audition for TV  – I didn’t get many auditions for TV initially out so my TV auditions were terrible to start with…

3. How did you get your first agent?

I wrote off to about 50 agents and invited them to my ALRA Drama School showcase. Adrian attended and I signed up.

4. What advice would you give to an actor starting out?

I would say training is very important. Go to drama school or some sort of class so you can develop your skills but don’t get stuck in the class. Always look for opportunities to perform live onstage or on camera… I tell every actor to sign up for the amazing showcase my company TriForce Creative Network does called MonologueSlam UK. (www.thetcn.com) Via this event you get to audition and perform which means you get a chance to flex your acting muscles in front of the right people i.e. Agents, Casting Directors, Writers, Directors etc.

5. Do you think the industry is changing?

Yes I think the industry is changing  – it is getting even harder! I feel like there are less avenues for people trying to get into the business and yet its an exciting time with TV leading the way via Netflix, Amazon, Hulu and HBO etc…

6. What are your ambitions and goals for the future?

My goals for the future are to do more of the same! As an actor I love switching between the mediums. I’m doing a U.S play right now at the Royal Court called Father Comes Home From The Wars. And before that I was filming Arrow on CW Network and recently I have just finished shooting a film called Full Dress.. So as you can see I love switching between TV, Film and Theatre.

This answer always changes depending on my mood….. but I think Crackhead Mick in the BBC2 comedy Rev is my role 🙂

10. What do you do to chill out when you’re not acting?

My passion is helping other actors through my company TriForce Creative Network , but I also try to get some holiday time and chill out time with friends and family…. I probably need to work on my chilling out routine…. I’m a bit of a workaholic!